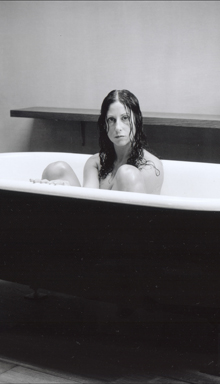 Was born in Leningrad, graduated from the State University of Arts and Culture major in Cultural Studies and Art-expertise. Alla Esipovich is the prize-winner of the competition «Se-Zam 2002» for the series «Portraits» in «SPb.Sobaka.ru» where she was the head of the photo-department in 2000–2004. Since 2003 actively exhibited in Russia and abroad. Was included in the Portfolio «Russian Contemporary photography» for the exhibition «Russia», New-York, Guggenheim Museum. Participated in more than 60 exhibitions in Russia and abroad. Her works are in the collections of Russian and foreign museums and private collections in Russia, Germany, the Netherlands, and the United States.

Since 2008 curator of the large corporate collection of Soviet porcelain. Porcelain and painting collector of the first quarter of the twentieth century (SPb – Petrograd).
2016 – curator of the exhibition “Petrov-Vodkin’s circle” in the State Russian Museum, the coordinator of the edition prepared for the exhibition (Petrov-Vodkin’s circle. Authors of articles: Eugenia Petrova, Alexandr Borovsky, Olga Musakova. – Palace Editions, SPb. – 2016).
Lives and works in St. Petersburg.

2013 – Is published the complete album of Alla Esipovich THAT’S IT. The first presentation of the book will take place in the framework of the Frankfurt Book Fair.

2011 – Participation at the exhibition “From the Contemporary art Department (new)” with works from the “No commet” series. The State russian museum.

2011 – Participation in the Biennale Wasser, Bad Breisig (Germany) with the No comment series. (catalogue)

2011 – Participation in the contemporary art exhibitions Gateways and Doors with the work from series Happiness, The State Russian Museum. (catalogue)

2010 – Participation in the exhibition Evolution of the Russian photography from the middle 1970 to 2010th, LES RENCONTRES D’ARLES, Arle, France. (catalogue).

2010 – Participation in the exhibition Photographer of the new Russia. 1990-2010. Presented by The Moscow House of Photogaphy (Multimedia art museum). Paris, France. (catalogue)

2010 – Participation in the GOGOLFEST with video “Star of the scene”, Kiev, Ukraine.

2009 – Participation in the Selections from the Claude and Nina Gruen Collection of Contemporary Russian Art, Zimmerli Art Museum, USA

2006 – Participation in the Forum “Art Fair”, Amsterdam, The Netherlands

2005 – The Fourth International Festival of the Moscow House of Photography “Fashion and Style in Photography”, project “Sandbox”. Museum of Modern Art in Ermolaevsky per., Moscow (catalogue)

2004 – Participation in the forum “Photofair”, Amsterdam, The Netherlands

2004 – The 38th International Forum of Modern Art “ART-Cologne”. Within the framework of the project of The State Russian Museum, Germany (catalogue)

2002 – Participated in the joint exhibition with American photographer Deborah Turbeville in the State Museum of History of Saint-Petersburg.

2011 – Miami, FAAM (Fine art auction in Miami), was sold one work from the Star of the scene seriese.

2006 – participation in the yearly Russian Art Sales Sotheby’s, New-York; the work from the series «No Comment» was hammered at a price of $4,600

The Museum and Estate “Petergof”

Private collections in Russia, Germany, The Netherlands, The USA